As nations gather in Paris for the Conference of Parties 21 under the UN Framework Convention on Climate Change (UNFCCC), emotions ran high with rallies staged around the world calling for decisive action against climate change. World leaders expressed support for the agenda to keep the global temperature down, but as to how these manifestations will shape in the course of the negotiations remains to be seen.

Aside from the individual commitments of the different countries in contributing to the drive in mitigating climate change, another significant issue that will likely divide the conference is climate justice. As the Philippines chairs the Climate Vulnerable Forum, a coalition of countries deemed to be most vulnerable to extreme weather, it was only right that President Benigno Aquino III emphasized the reality that the countries, which suffer the greatest from the impacts of climate change are the ones least responsible for global warming, since their carbon emissions are insignificant compared to the developed economies. Given this premise, PNoy called for climate finance to help the vulnerable countries cope with the “new normal”. 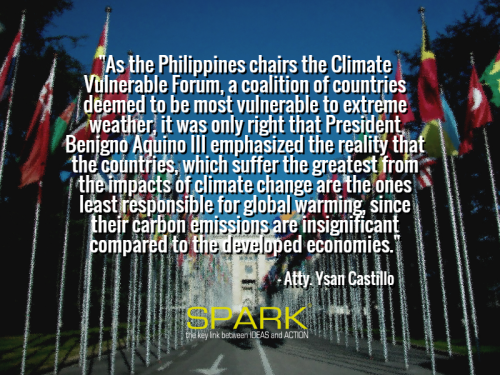 Certainly, such a rhetoric, wittingly or unwittingly, divides those in attendance into developing and developed countries. The idea of climate justice is to exact compensation from the rich nations to answer for their GHG emissions that drove global temperature up. Thus, what the developing countries are asking for is not financial assistance or aid, but rather reparations for the supposed “sins” of the first world to Mother Earth. For this reason, it is inevitable that exacting climate justice will be such a serious sticking point that may well jeopardize any new agreement or treaty that embodies decisive action to curb climate change. Just how can the “poor” States, despite greater in number, get justice from the fewer “rich” States without giving them a reason to abandon the negotiation table, which in the first place became necessary because of their own doing? Seems insurmountable.

At any rate, climate finance, for a country like the Philippines, will go a long way if properly managed. As can be gleaned from our Intended Nationally Determined Contributions (INDC) submission, the transportation sector is a major, if not the main, as anyone can observe, source of carbon emissions in our country. We are all witnesses of how prevalent smoke belching is, especially in Metro Manila and other city centers in the country. Worse, the carbon and toxic emissions get multiplied when these vehicles, particularly the public vehicles and buses, take more time on the road because of the traffic situation. Hence, money tagged for climate change must find their way to improving transportation infrastructure.

One of the more obvious solutions to the severe traffic congestion problem is to build on the road networks. To be effective, public works planning must have foresight and not merely react when the carrying capacity of the roads are breached. Also, construction of new roads must be based on sound engineering designs and not on political pressure or some private interest. Needless to say, building new road networks must done hand in hand with ensuring that these roads remain passable. More evident during the Christmas season, alternative routes become restricted as vendors, some of whom with permits from the local government units, occupy the area as if a market just sprung in the middle of the road.

On the demand side, the government must invest in facilitating the establishment of more railways. During the Aquino Administration, no new lines were created, and even existing ones declined as aptly portrayed by the almost daily breaking down of the MRT trains. Taking the example of densely populated cities in developed countries, mass transit can provide mobility to commuters more efficient than using their own vehicles. That is why it is logical to theorize that, with competitive pricing schemes, motor vehicle sales skyrocketed for the lack of a better alternative to reach destinations. Simply put, more vehicles, more traffic. 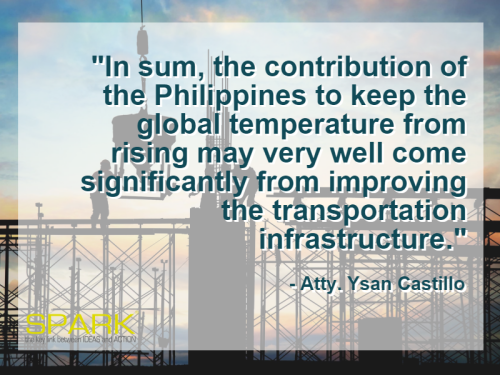 In sum, the contribution of the Philippines to keep the global temperature from rising may very well come significantly from improving the transportation infrastructure. This agenda will be better executed with the due allocation from and the proper management of climate finance from the developed countries. After all, by addressing the carbon emissions of this sector, public health issues, relating to air quality, will also be directly solved.