The Stratbase Albert del Rosario Institute (ADRi) is an independent international and strategic research organization with the principal goal of addressing the issues affecting the Philippines and East Asia.

After one of the most consequential national elections in the country’s history, Ferdinand “Bongbong” Marcos, Jr. is set to become the 17th president of the Philippines through a majority vote. Thirty-six years after being forced into exile in the United States, his family’s return to power holds significant implications for the country’s foreign policy. The presidency of Bongbong Marcos is expected to face complex and multifaceted challenges brought by heightened geopolitical risks and power shifts in the region. His call for “unity,” conveyed throughout the campaign period, will also be tested against circumstances on the ground, especially on critical issues such as the territorial and maritime disputes in the West Philippine Sea. Read More 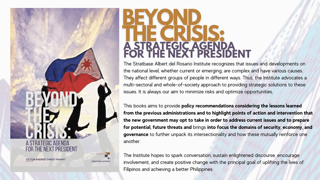 The Stratbase ADR Institute released its publication titled, “Beyond the Crisis: A Strategic Agenda for the Next President,” on May 20, 2022. This book provides policy recommendations considering the lessons learned from previous administration and to highlight points of action and intervention that the new government may opt to take in order to address current… Read More

With a contentious family history, presumptive President Ferdinand “Bongbong” Marcos Jr. faces an uphill battle in establishing his credibility as a leader. He said we should judge him by his actions — not by his family’s past. Let’s take him up on this challenge. How will we do this? First, we will look at whether he is getting the basics right. Is he addressing the issues that matter? What is he doing to achieve his campaign promises and policy pronouncements? Read More

This is an opportune time to think about not only who we will vote into office, but the reforms our new leaders should undertake to reverse our losses in the past, enable us to recover and sustainably grow, and bring a decent life to as many Filipinos as possible. The problems are so daunting that one is moved to ask: Where do we even start? Read More

The Stratbase ADR Institute, in partnership with Democracy Watch Philippines, conducted the final leg of the Vote Right 2022 Voter Education series last 2 May 2022. Entitled “Vote Right 2022: The Luzon Leg,” this final voter education forum leading up to the elections provided a space to remind students and voters as a whole of their responsibility to uphold democracy through casting their ballots. Read More

Russia’s invasion of Ukraine demonstrates how violent conflicts wreak havoc on the international system and undermine the global economy. Heightened geopolitical risks from such security challenges have continued to affect governments, businesses, and communities worldwide. The far-reaching implications are instructive of the essential roles of diplomacy and multilateral cooperation in ensuring long-term security and prosperity. Hence, a renewed definition and understanding of cooperation and strategic partnership among states to collectively solve conflicts and other security challenges have become more significant. Read More

The Philippines enjoys an abundance of areas which would benefit from significant, structural reform. There is a long list of governmental and societal problems which have largely remained unaddressed for several decades. Issues of generational poverty, corruption, and infrastructural stagnation are some key concerns. In light of these pressing challenges, but limited resources and political will, one is forced to consider which reforms should be given priority. Which reforms can generate high-impact, effective changes?  Read More