Darkness and lack of electricity is inhuman. Having expensive and unstable electricity supply when cheaper and stable power sources are available is wrong and lousy. When many streets and roads are dark at night because local governments or private subdivisions are economizing on their monthly electricity bills and power supply is limited, there are two negative social consequences: more vehicular accidents and more crimes. Criminals love darkness where their victims cannot see or recognize them.

And when there is frequent power outages and brownouts, there are two other negative social consequences: more fires when more people use candles more frequently, or more noise and pollution as some people turn on their generator sets that  run on expensive fuel, diesel.

These are crimes against humanity, the poor especially, that the “limit/kill coal” movement does not take into serious consideration.

Among the cheap and stable energy sources that the country should further take advantage of is coal. While many environmental activists view coal as “enemy” of sustainable development, this is a misguided view. In the Philippines, coal power plays a complementary and non-contradictory role to renewables development.   Here’s why.

One, without coal and natural gas, the Philippines will be as dark at night as North Korea and other underdeveloped countries experiencing daily “Earth hours”.

In Luzon grid, coal + natural gas + oil have produced 86.6 percent of total power generation in the first half of 2015. The “old renewables” hydro and geothermal contributed 12.5 percent while the “new renewables” wind, solar and biomass contributed only 1.0 percent, very small.

In the Visayas grid, coal and geothermal provide the bulk of power generation and in Mindanao, it is hydro, oil and coal.

The actual power generation of coal + natural gas of 84.4 percent are much larger than their power capacity of 61.2 percent of total dependable capacity in the Luzon grid. This means that power plants that use these two fuel types are producing more electricity at stable supply and cheaper prices than other power plants that use oil and geothermal, hydro (low supply during dry months) and new renewables (unstable supply and expensive). 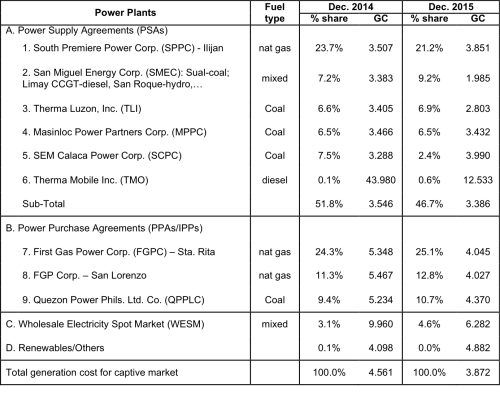 The claim therefore by some sectors and observers that coal power is the enemy of sustainable growth of the Philippines is based on subjective and non-objective point of view. Their proposal to outright banning of coal and use only renewables (old and new), is based on emotionalism and alarmism.

For now at least, coal-powered plants are still the most dependable sources of power generation. Given the country’s need for immediate additional power generation to meet the demands a growing Philippines, the need for coal-fired plants is still there.

With regard to developing renewables, however, the US National Renewable Energy Laboratory (NREL) projects that the country has vast potentials in three “new” renewables: wind, solar and biomass. Currently, the “traditional” renewables dominate the renewable energy market: large hydropower and geothermal energy.

There is a continuing debate in the country as to how much the new renewables should be inputted in the energy mix. As shown in the above table, while the cost of mostly coal and natural gas from different power plants can be as low as P3.87/kWh, the guaranteed and fixed generation price of solar and wind are P9.68 and P8.53/kWh respectively, or nearly 3x. This will not help the country escape from the unhealthy label of having the “second most expensive electricity in Asia next to Japan.”

So while a balanced energy mix of both renewable and non-renewable sources of energy should be pursued, policy makers should keep in mind these two important factors in determining the optimal mix: stability and affordability of power for the consumers and businesses alike.