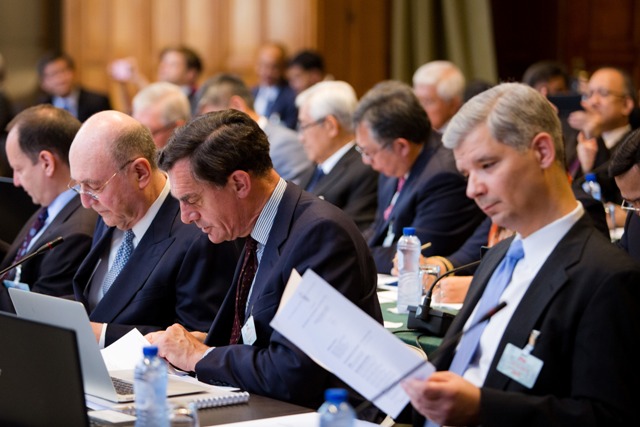 Counsel Team for the Philippines, including Prof. Bernard Oxman, Prof. Alan Boyle and Lawrence Martin at the Permanent Court of Arbitration in The Hague, Netherlands PCA/Released

MANILA, Philippines — China technically consented to undergo arbitration by signing the United Nations Convention on the Law of the Sea (UNCLOS), one of the Philippines’s legal counsel said on Friday.

Beijing has claimed that Manila’s arbitration case before the Permanent Court of Arbitration (PCA) was illegal and that its ruling was null and void.

Philippines’s legal counsel Lawrence Martin noted that China signed the UNCLOS in 1982 and ratified it in 1996.

“When it ratified the Law of the Sea Convention, it agreed to all of the provisions of the convention and among the articles of the provision is Article 287 which says that one state may initiate an arbitration against another state unilaterally,” Martin said in a public forum held at the University of the Philippines Diliman.

China insisted that it did not consent to the arbitration the Philippines initiated to resolve the South China Sea dispute and refused to participate in its proceedings.

“By signing the UNCLOS, China specifically agreed that the Philippines, like any other state, could start an arbitration against it. In other words, China did consent when it signed the Law of the Sea Convention,” Martin said.

Beijing has also insisted that the arbitral tribunal based in The Hague, Netherlands had no jurisdiction over the case.

Martin pointed out that Article 288 of the UNCLOS states that tribunals have jurisdiction over disputes relating to the convention.

“It’s not up to China to say it does not have jurisdiction. Again, this is a provision that China specifically agreed to when it ratified the convention in 1996,” the country’s legal counsel said.

The law of the sea expert added that China also agreed that awards issued by the tribunal would be final and binding without appeal as it was also stated in the convention.

The PCA has ruled that China’s nine-dash line claim over the South China Sea does not have a legal basis. The arbitral tribunal also ruled that China violated the UNCLOS by building artificial islands in the Spratly Islands which is included in the Philippines’s 200-nautical mile exclusive economic zone.