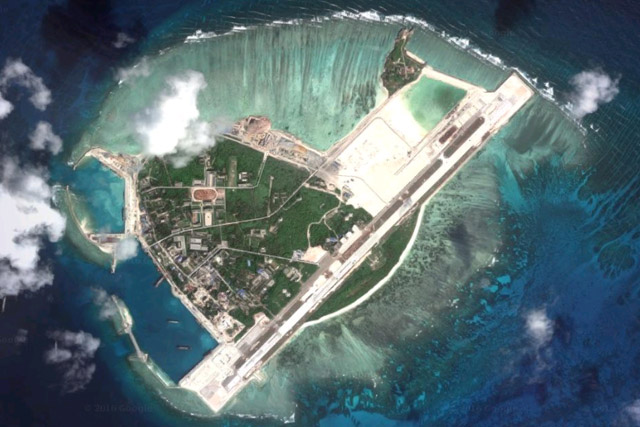 MANILA, Philippines – The international community owes the Philippines a debt of gratitude for bringing the arbitration proceeding and seeing it through, despite the difficulties – which one suspects are by no means over.

The arbitral award is important in its own right: the South China Sea is a vital artery in the global economy, carrying $5 trillion in trade annually; it also contains an estimated 11 billion barrels of oil and 190 trillion cubic feet of natural gas, 12 percent of the global fish catch, and fragile marine environments.

How the claimants, the wider region and the international community respond to the opportunity the award represents will be vital.

The award is an inflexion point, not just for the long running South China Sea dispute but with consequences reaching well beyond.

What’s at stake is nothing less than the kind of region we wish to leave to our descendants.

Will it be a region that is open, peaceful and prosperous, organized and conducted on the basis of the rule of law, freedom of navigation and overflight, and peaceful resolution of disputes between coequal states? Or will it be a hierarchical region that lives under the constant shadow of coercion and the omnipresent risk of miscalculation, where bigger countries prevail over smaller ones and power trumps justice?

The liberal international order currently faces a greater range of challenges than at any time in the past half century, including Russian aggression in Eastern Europe, Brexit, the forces of disintegration in the Middle East, metastasizing Islamist terrorism, and Chinese assertiveness in the Western Pacific – not to mention a fragile global economy and rising populist sentiment in many countries.

We need to be mindful that what is playing out in the South China Sea is only one element of a broader geopolitical competition. This is often portrayed as an old-fashioned great-power competition between the rising power China and the status quo power the United States. But more fundamentally it is an ideational contest that will shape the nature of the regional and global order well into this century.

We need to be mindful that what is playing out in the South China Sea is only one element of a broader geopolitical competition.

It is increasingly clear that China is implementing a concerted long-term maritime strategy, using all the instruments of national power to shape that order according to its perceived interests and to condition future US and regional expectations.

Its military modernization agenda, increasingly assertive paramilitary and military presence in the South China Sea and East China Sea, diplomacy, economic power, “lawfare,” cyber and information operations are all designed and coordinated to counter longstanding areas of US strategic advantage in the region, particularly the ability to project power through forward-deployed military forces and its network of alliances.

Over time China seeks to complicate US military planning, weaken the credibility of US security commitments, fragment ASEAN and other regional bodies, and coerce specific regional states to accommodate its self-defined “core interests”, including its claim to 85 percent of the South China Sea.

The arbitration outcome is a setback for this agenda, as is South Korea’s recent agreement to host a US THAAD missile defense system, and China has met stern resistance in the East China Sea from Japan. But in the South China Sea at least Beijing’s strategy has met with considerable success.

For example, it has been able to occupy, build up and construct military-grade facilities on a network of seven disputed features in the Spratly Islands. These can be fully militarized within days and used to intimidate neighbors and complicate US operations in the South China Sea short of all-out conflict. Yet China has been unmoved by reputational damage or threats of isolation and has shown a higher tolerance for risk than Washington. Beijing has managed at least up to this point to maintain stable relations with the United States, including by holding cooperation on global issues hostage – although there are reasons to believe this approach may be less successful under the next American president, whoever she or he is.

China has been unmoved by reputational damage or threats of isolation and has shown a higher tolerance for risk than Washington.

While it targets key areas of US advantage, China’s strategy is not just a problem for the United States. We all have a stake in the region’s unprecedented prosperity and the stability that underpins it, and China is undermining the vital pillars that have supported the region’s success for more than half a century: freedom of navigation; an open and inclusive region; and peaceful resolution of disputes in accordance with international law.

So where is this all going, and what should be done?

The award gives China an opportunity to reassess its current course and to show that these are not its objectives. It has kept the door open to bilateral negotiations with the Philippines and other claimants, and has refrained thus far since the award from concrete escalatory actions. But its rhetorical onslaught against the court and the arbitration outcome is far from encouraging.

If China wants to show its intentions are not those outlined above it will refrain from further militarizing the seven existing facilities and from any new island – building activity, particularly at Scarborough Shoal. It will embark on in good faith bilateral dialogue with the Philippines. And instead of working to divide and weaken ASEAN it will quickly conclude a robust South China Sea code of conduct.

The new Philippines government is still formulating its response, and my impression is that officials are grappling with what might be called “catastrophic success.”

This will obviously be a delicate balancing act. It’s a time for cool heads, and Manila is sensibly being careful not to flaunt its legal victory – it’s important not to do anything that could give China a pretext for escalation.

But it’s also a time for firmness and resolve. Thanks to difficult and far-sighted decisions taken by its predecessors, the current government has inherited a position of substantial strength.

Once it has completed its analysis of the award the government will need to begin laying the groundwork for a constructive dialogue with Beijing. But before entering negotiations it should be guided by three principles: continue to emphasize the primacy of the rule of law; consult closely with its key allies and partners; and have a very clear understanding of its own bottom lines.

It should make clear during this initial dialogue that it has no intention of trading away principles that are fundamental not only to the Philippines’s national interests but to the rules based order and that any negotiations have to be based on the court’s award. This is likely to be a sticking point with China but negotiations on any other basis would undermine the Philippines’s position and interests.

It should make clear during this initial dialogue that it has no intention of trading away principles that are fundamental not only to the Philippines’s national interests but to the rules based order and that any negotiations have to be based on the court’s award.

Other claimants now face a dilemma as a result of the Philippines’s successful arbitration. The scope of the award may encourage Vietnam, Indonesia and other claimants to consider seeking clarity from the court on their own situations. As a matter of principle disputants should be encouraged to pursue arbitration; this is certainly preferable to taking unilateral action to change the status quo. But they would probably be well advised to bide their time and see how the Philippines’s discussions with China play out over the next few months.

The South China Sea will remain a difficult and divisive issue for ASEAN as long as China continues to exert intense pressure on members such as Cambodia and Laos. But next week’s meeting of ASEAN foreign ministers in Laos is an opportunity for ASEAN countries to step up and take a stronger stand because it bears directly on many of ASEAN’s longstanding principles, such as mutual respect, equality, freedom from external interference and coercion, and peaceful resolution of disputes. It will erode regional confidence in ASEAN centrality if it is not able to agree a joint statement on the arbitration; at a minimum as many members as possible should make strong individual statements.

The South China Sea will remain a difficult and divisive issue for ASEAN as long as China continues to exert intense pressure on members such as Cambodia and Laos.

Aside from continuing to offer strong declaratory support, the United States and other regional countries such as Japan, Australia, India and South Korea also have other important roles to play.

They have substantial interests in upholding the regional order, and most have made robust statement on the award. In due course, after the dust settles, the United States and other regional powers should conduct a pattern of routine freedom of navigation patrols reflecting the court’s categorization of features in the Spratlys. Everyone gains from freedom of navigation, and this responsibility should not be left to the United States to shoulder alone.

These regional powers are also seeking to strengthen their involvement and presence in Southeast Asia and their bilateral engagement with regional countries, including the Philippines. The US Enhanced Defense Cooperation Agreement and Australia’s Status of Visiting Forces Agreement with the Philippines are two examples.

Over the longer term these countries can and should make strong contributions to building the maritime capacity of Southeast Asian nations and increasing their resilience and ability to stare down any attempts at intimidation. Boosting shared awareness of the maritime domain in the South China Sea and beyond will help to build a shared appreciation of the threats and challenges facing the region – including illegal fishing, piracy, terrorism, natural disasters and pandemic disease – and a foundation for concerted action in response.

Boosting shared awareness of the maritime domain in the South China Sea and beyond will help to build a shared appreciation of the threats and challenges facing the region.

Nor should we let Europe off the hook. Europe is currently preoccupied by Brexit and other problems closer to home and would prefer to focus on the economic opportunities China offers. As I have said, however, how events in the South China Sea play out will shape the nature of our region for decades to come, and the regional order in the world’s most dynamic region will have a major bearing on the global order – and hence on Europe. French Defense Minister Le Drian has it right: if UNCLOS is flouted in the South China Sea “it will be in jeopardy in the Arctic, the Mediterranean and elsewhere tomorrow.”

There is a clear nexus between aggression and coercion in Eastern Europe and in Asia, and how we respond.

We all have important economic ties with China, and no-one wants confrontation or miscalculation, let alone conflict.

But sometimes it is important to stand up – calmly and without provocation but clearly and firmly nonetheless – for our principles.

This is never easy.

But there is strong international support for the principled position the Philippines has taken to date.

And it will be even harder to take a principled stand in support of a benign regional order in 10 or 20 years if China further consolidates its power and cannot be dissuaded now from doubling down on its current long-term strategy.

If we are resolute now, however, the arbitration outcome could prove in time to be a unifying, integrating moment for the region.

Depending on the choices that China in particular but also other countries make, it is an opportunity to show that the region is responding to its challenges, that regional institutions are maturing, and that the countries of the Asia Pacific remain committed to working together in pursuit of continued economic integration, development and security.

Andrew Shearer is a former Australian National Security Adviser and Senior Advisor on Asia Pacific Security at the Center for Strategic and International Studies. He is also a contributing writer to the Albert Del Rosario Institute (ADRi).