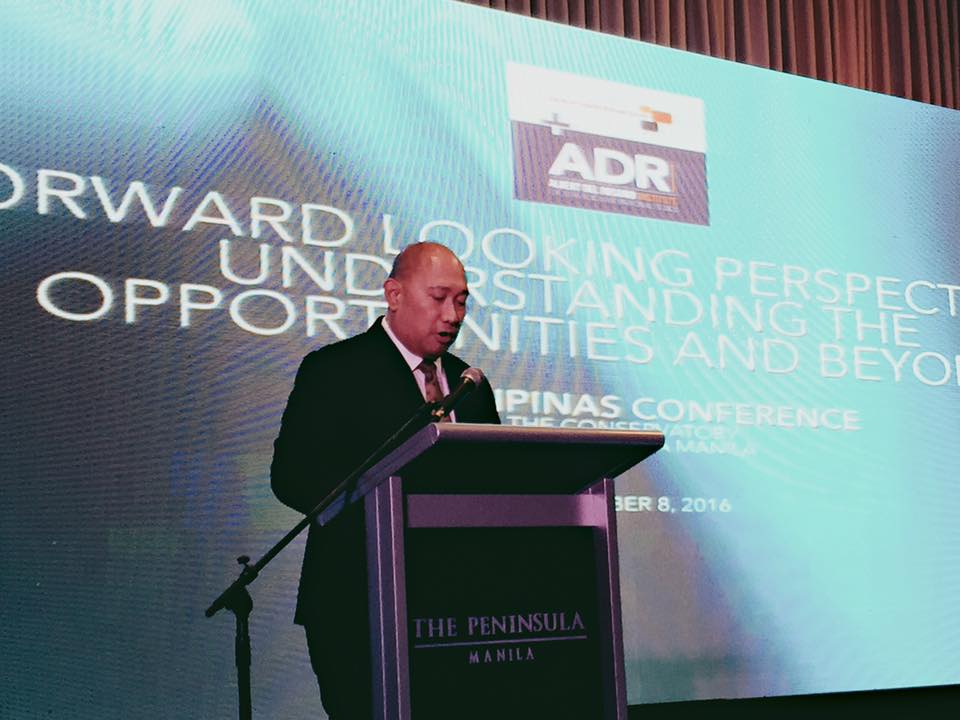 Good morning, everyone, and welcome to the first Stratbase ADR Institute PILIPINAS CONFERENCE.

In 2016, a great deal changed in the Philippines and around the world. During the first months of the year, many of us were absorbed by the elections and the stellar performance of a dark horse candidate named Rodrigo Duterte. In the months since his election, President Duterte has lived up to his promise of shaking up the political establishment and bringing the government closer to everyday people through his focus on law and order, eliminating corruption, and federalism.

In other countries, outsider candidates, parties, and causes have seen undeniable success. The most recent and familiar example is Donald Trump, who campaigned on returning jobs to the working class, anti-Muslim and anti-immigration policies, and on ‘draining the swamp’ in Washington, D.C.

There have been similar themes at work in the United Kingdom, where people voted in June to leave the European Union, as well as in France, Italy, and Austria.

If there is a lesson to be drawn from ballot boxes around the world, it must be that the political establishment of any country should not be slow to recognize the currents of change and, importantly, what these changes represent.

In the West, as well as in the Philippines, voters are looking for effective governments that safeguard their jobs and provide safety from violence. When governments are believed to be taking their eyes off that ball, voters register their dissatisfaction—even if it means disturbing fundamentals that most people take for granted.

In these dynamic times, we are reminded of the adage that ‘all politics are local’—local politics are rising on a global scale. Here in the Philippines, the May elections also demonstrated the importance of neighborhood politics and the day-to-day. A federal system of government, which we will discuss in our first panel today, may help bring politics closer to the people. Federalism is an idea that has been floated for years, although it took the election of President Duterte to bring the possibility to the forefront.

The national conversation on the West Philippine Sea cannot be separated from home-grown concerns. For many Filipinos, the maritime disputes are important because of their impacts on our economic lifeblood. For fishermen and their supporters, access to Scarborough Shoal is about continuing their livelihoods and way of life. For others, the exhaustion of the Malampaya gas field by 2030 keeps us interested in surveying and exploiting the resources at Reed Bank.

I hope our second panel will help us examine the future of this region’s stability and how competitive tendencies can be channeled toward fair outcomes for all.

As always, we are interested in boosting the engines of the economy. This is the bottom line for a majority of Filipinos and a priority for our institute. While encouraging entrepreneurship and helping to connect Filipino enterprises with the global marketplace, we also need to consider how to help our firms develop both strength and resilience amid international volatility. I am looking forward to both of our afternoon discussions, which will span from the experience of our SMEs, to Filipino firms expanding abroad and, of course, to foreign investors in this country.

Despite the number of changes that surround us, I am optimistic that in the year ahead our people can prosper and our government can get it right. Yet, for this to happen, we must identify the currents of change as they occur and look beyond the politics of our elected representatives.

I hope that today’s conference will provide an opportunity for us to get thinking about and sharing views about the year that is to come.

It has been said the role of think tanks “includes providing discipline and rigor in public debate, creation of new knowledge, compensating the inadequacies of government, strengthening the debate in national media, and even constructing social and political consensus.”

What does this mean for an institute such as us? We see ourselves as a vital source of new ideas, strategic and critical thinking that provides “relevant just-in-time information and analysis for the critical decisions of Philippine policymakers.”

Since its inception in 2014, Stratbase-ADRi has published policy reports and outlooks covering topics in foreign policy and defense, trade and investment, energy and the environment, and governance. Throughout this year, we have held discussions with audiences of different sizes, with the objective of engaging policymakers, subject matter experts, stakeholders, students, and others in topics of national importance.

We hope that, through our efforts, the institute will have done its part in fostering strategic thinking and constructive discussions in the Philippine policy space.

I would like to welcome everyone to the first Pilipinas Conference. Thank you for taking the time to join us.