There was understandably widespread dismay when President Benigno Aquino III summarily rejected calls to reform what many had described as out-dated and unjust income tax laws.

The loudest uproar came from the middle class salary earners, who have long been overburdened by one of the highest tax rates in the region (only Thailand and Vietnam’s 35 percent is higher than our 32 percent).

Senator Sonny Angara and Representative Miro Quimbo had actively worked to bring the long overdue issue to public consciousness through bills in Congress in their respective ways and means committee. In addition to growing public clamor, business groups such as the Joint Foreign Chambers, the Federation of Philippine Industries and respected think tank Foundation for Economic Freedom have all supported the call. In this light, President Aquino’s most recent pronouncement to further study the matter should be a clear signal to the DOF to give due importance to this issue.

As it is, existing tax rates not only punish the hardworking members of the country’s middle-class, it also renders the economic landscape uncompetitive in terms of attracting foreign investments. We therefore feel it betrays a deep misunderstanding of the issue and targets the wrong segment of society.

While we understand the drive to increase the tax revenues, we believe the campaign should focus on widening the tax base, including instituting a more efficient tax collection system, curbing big-time smuggling, and chasing after noncompliant businesses and individuals. Some P30 billion alone is lost from oil smuggling. Pursuing these measures to us presents the fairest way to unburden millions of Filipinos that will not necessarily compromise the country’s revenue stream.

It should also be noted that while lower income tax rates would briefly affect the country’s coffers, it will further strengthen our already booming consumer economy, which would consequently result to higher government revenues, this time through the expanded value added tax (EVAT). The more cash that moves around the market, the livelier the economy becomes in the long term.

On the other hand, aware of more lenient, reasonable income tax rates elsewhere in the region, some talented Filipinos have chosen to live and work abroad, breaking families apart and contributing to brain drain. To illustrate, an employee who earns P500,000 a year is subjected to a 32-percent income tax. The same income merits 10 percent in Thailand and 2 percent in Singapore. One of the salient features of proposed tax reforms corrects this anomaly. With looming ASEAN integration and national borders disintegrating, this becomes a real issue. 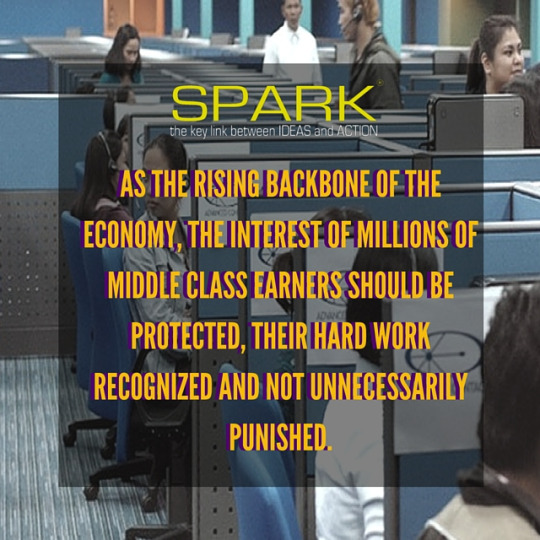 As a firm advocate of the rights of the broad citizenry, CitizenWatch supports any initiative that seeks to reform the country’s unjust income tax laws. As the rising backbone of the economy, the interest of millions of middle class earners should be protected, their hard work recognized and not unnecessarily punished.

Just as important is our ongoing call to act on the recommendations of the DOE Task Force to Study Ways to Reduce the Price of Electricity to, “Review whether or not the government is ‘overtaxing’ the energy sector”. Like the high income taxes, overtaxing results in unnecessarily high electric bills and heavily all sectors and is a major factor affecting our country’s competitiveness.

We call on the PNoy administration to demonstrate bold and strategic tax reform that is long overdue and well within its political power to pass into law.

We call on all Filipino workers to shout out their support for an just and globally competitive tax regime!