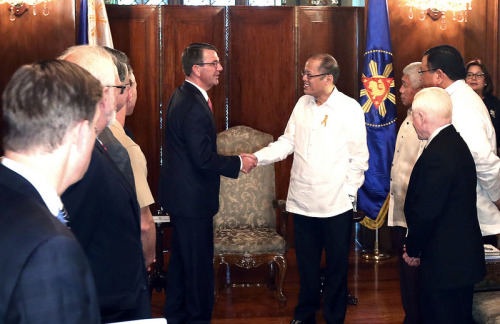 Secretary of Defense Ash Carter shakes hands with Philippine president Benigno Aquino during his visit to Manila on April 14, 2016.

Secretary of Defense Ashton Carter’s trip to the Philippines on April 13-15 was an affirmation of U.S. support for its treaty ally amid the simmering South China Sea maritime disputes. The timing of his visit — at the end of the annual Balikatan U.S.-Philippine joint exercises and just weeks before an expected decision by the Permanent Court of Arbitration in The Hague in the Philippines’ arbitration case against China’s nine-dash line claim — was a clear message to Beijing and Manila that Philippine maritime security is a priority for the United States.

To underscore this, Carter announced just before the trip that out of this year’s $50 million funding for the Southeast Asia Maritime Security Initiative (MSI)—a five-year, $425 million project to enhance partner capabilities and maritime domain awareness — more than 80 percent was earmarked for the Philippines. The Philippine armed forces sorely needs this money to have any credible presence in the face of Chinese provocations, but if enduring regional security and maritime capabilities are at the heart of the MSI, it is critical that the funds also cover the Philippines’ abysmal security gap in the Sulu and Celebes Seas.

The maritime zone roughly circled by the islands of Palawan, Borneo, Sulawesi, and Mindanao forms the border between the Philippines, Malaysia, and Indonesia. It is a hopelessly porous border, and the Sulu archipelago that splits the Sulu and Celebes Seas is a hot spot for many of the criminal activities that plague the ungoverned regions: drug smuggling, human trafficking, and gunrunning.

The most notorious threat in the region, under renewed focus following the beheading of Canadian hostage John Ridsdel on April 25, is the Islamist Abu Sayyaf Group. Abu Sayyaf is a criminal and sometimes-terrorist organization that has declared allegiance to the Islamic State. It runs a kidnapping-for-ransom industry and currently holds at least 22 foreign hostages. The ease with which Abu Sayyaf transports hostages, evades pursuit, and connects with smaller allied militant groups to facilitate kidnappings is largely due to the Philippines’ inability to monitor and police the waters off its coast.

The Philippine military’s efforts to stamp out the organization over its 25-year span have failed, and the rash of recent kidnappings shows the government is still a long way from removing this persistent threat. If Philippine naval and Coast Guard forces hope to focus resources on the external threat posed by Chinese expansionism, they cannot afford the distraction posed by the ungoverned southern littoral region.

Successfully subduing the criminal and militant organizations in the area will also reap benefits in international regional cooperation. Malaysia, which receives a pittance of this year’s MSI funding, is nevertheless allocating a substantial portion of it to reinforcing the Eastern Sabah Security Zone, established in 2013 after the Lahad Datu standoff. The standoff, which saw 70 people killed over six weeks before the Malaysian military prevailed, was sparked by an invasion of militants from the Sulu archipelago claiming historical sovereignty over parts of Malaysia’s eastern Sabah State. The incident was an embarrassment to the Malaysian military, which faced criticism for being caught unaware by the attack, and preventing another invasion is a clear priority for Prime Minister Najib Razak. Malaysia also has at least four citizens being held hostage by Abu Sayyaf.

After two separate attacks in late March and April in which 14 Indonesian sailors were abducted from coal barges by militants affiliated with Abu Sayyaf, authorities in several coal ports in Indonesia banned ships from traveling to the Philippines. The threat posed to the shipping route, along which at least $40 billion of trade passes annually, led Indonesian coordinating minister for political, legal, and security affairs Luhut Pandjaitan to call for ship escorts and joint patrols with the Philippines and Malaysia to avoid creating “a new Somalia.”

Armed escorts will help reduce the threat of trade disruption, but will not tackle the root cause of the problem and will be a drain on resources for all three nations. MSI funding, especially devoted to maritime domain awareness capabilities like those at the heart of the Philippines’ National Coastal Watch System, will improve the ability to detect incidents in real time, not after the fact. Intelligence, surveillance, and reconnaissance can be shared among domestic and international partners, promoting a common operating picture and cooperation among neighbors that will lead to a more cohesive and stable regional maritime security environment.

The Department of Defense should also consider MSI funding for the Maritime Border Security Initiative under the Philippine Coast Guard and the Maritime Special Operations Unit of the Philippine National Police, both projects launched under the guidance of the U.S. Justice Department’s International Criminal Investigative Training Assistance Program. These programs are dedicated to improved security along the Philippines’ southern sea border but do not have the resources to realistically cover such a large region.

Highlighting the Sulu and Celebes maritime threat is critical to ensuring it is not overlooked in the effort to challenge Chinese coercion in the South China Sea. Language in the National Defense Authorization Act of 2016, which authorizes the MSI, makes clear that the assistance and training authorized are intended for maritime security missions in countries “along the South China Sea.” Although the focus on China is readily apparent, the initiative does not say that assistance must be bound to activities exclusively within the South China Sea.

This opens the door to MSI funding for increased maritime security and maritime domain awareness activities in the troubled Sulu and Celebes Seas, essential for lasting regional security. For Philippine Navy assets to be able to protect Philippine fishing vessels in the South China Sea, they must be freed from duties that the National Coastal Watch System and Philippine Coast Guard should cover in the archipelago. Establishing cooperation and interoperability among the Philippines, Indonesia, and Malaysia in the tri-border area will encourage the same in the South China Sea, reducing the potential for destabilizing conflict among neighbors and increasing pressure on China to interact with regional claimants as a bloc.

Allocating a portion of the 2016 MSI funding to Philippine missions in the Sulu and Celebes Seas would provide a method to improve partner capabilities and contribute to greater peace and security in the region. Bringing some order and security to the ungoverned maritime zone in the tri-border area will allow partners to devote the appropriate attention and resources to ensuring a fair and peaceful resolution to disputes in the South China Sea.

This article was originally posted at cogitAsia, a blog of the CSIS Asia Program.