On 12 July 2016, the Permanent Court of Arbitration (PCA) under the United Nations Law of the Sea (UNCLOS) ruled in favor of the Philippines in its 14 claims against China’s expansive territorial claims in the South China Sea that it is a violation of international law. The court declared that China’s claims—defined by the nine-dash line—to an expansive maritime zone and its underwater resources are illegal.

It also maintained that Chinese land reclamation and construction projects in the land features in the South China Sea violate the Philippines’s territorial rights. The ruling also found China guilty of destroying the maritime environment by building artificial islands and illegally preventing Filipinos from fishing and oil exploration in the South China Sea.

The PCA’s rewards to the Philippine case is a strong assertion of the dispute resolution mechanism of UNCLOS and more significantly, the triumph of the Philippines’s liberal approach over China’s realpolitik approach in the South China Sea dispute.

Back to the roots of arbitration

The decision to file the claims against China can be traced to the 2012 Scarborough stand-off between Philippine and Chinese civilian vessel. It was the proverbial tipping point caused by China’s pattern of protracted series of aggressive actions against the Philippines two years earlier. Confronted by an assertive China, the Philippines relies on its commitment to an international law governing the use of the world oceans as a means of settling territorial disputes.

Then Philippine Foreign Secretary Albert Del Rosario emphasized the importance of this approach when he declared that the “UNCLOS has never been more important for the Philippines than today, when overlapping maritime claims threatens as never before the peace and prosperity in our part of the world.” Without any credible military capability to back its diplomacy, for the Philippines, “the legal track presents the most durable option to defend the national interests and territory on the basis of international law.”

During the stand-off, the Philippines reiterated its proposal to put the dispute over the shoal for arbitration by the International Tribunal on the Law of the Sea (ITLOS). The Philippines justified its insistence on a multilateral approach to ensure the freedom of navigation and the unimpeded commerce in the South China Sea which are grave concerns not only of the Philippines but also of other countries in the area and beyond.

“The Philippines justified its insistence on a multilateral approach to ensure the freedom of navigation and the unimpeded commerce in the South China Sea.”

In mid-June 2012, China effected its occupation of the shoal after the Philippines withdrew its single coast guard vessels from the area. Crew members of Chinese Maritime Surveillance (CMSU) vessels constructed a chain barrier across the mouth of the shoal to block Philippine access to it. China deployed these vessels to protect the fleet of Chinese fishing boats operating deep into the Philippines EZZ.

In October 2012, Chinese Foreign Minister Fu Ying visited Manila to badger the Philippines in accepting in silence China’s exercise of de facto occupation of the Scarborough Shoal. Philippine officials, however, were not cowed into accepting China’s fait accompli.

In January 2013, the Philippines confronted Chinese coercive diplomacy head on by filing a statement of claim against China in the Arbitral Tribunal of the United Nations Convention on the Law of the Sea. In its statement of claim, the Philippines made it clear that it does not seek arbitration over which party has sovereignty over the islands claimed by both the Philippines and China. Rather, it merely requests the Arbitral Tribunal to issue an opinion on the following issues: a) whether China’s maritime claim in the South China Sea based on its so-called nine-dash line claim is valid or contrary to UNCLOS; and b) whether Scarborough Shoal, Johnson Reef, Cuarteron Reef, and Fiery Reef, which are submerged features and that are below sea level at high tide are islands or rocks under Article 121 (3) of the Convention.

“The Philippines made it clear that it does not seek arbitration over which party has sovereignty over the islands claimed by both the Philippines and China.”

China refused to participate in the international arbitration and openly expressed its opposition to the Philippines’s filing of a case to the arbitrage tribunal.

On 20 February 2013, the Chinese ambassador in Manila returned the notice of arbitration to the Department of Foreign Affairs. Chinese foreign ministry spokesperson in Beijing branded the filing as “factually flawed” and accused Manila of violating the non-binding 2001 Declaration of Conduct of the Parties in the South China Sea which provides for ASEAN and China to settle their maritime disputes among themselves.

“Chinese foreign ministry spokesperson in Beijing handed the filing as “factually flawed” and accused Manila of violating the non-binding 2001 Declaration of Conduct of the Parties in the South China Sea.”

In April 2013, a visiting Chinese foreign ministry official warned Manila of the consequences of pushing the arbitration process against China. Beijing’s resentment towards Manila became more glaring in November 2013 after it donated a mere US$100, 000 to the Philippines after the central part of the country was devastated by Typhoon Yolanda (Haiayan)—a category five typhoon.

The Philippines’s filing statement of claim against China in the Arbitral Tribunal of the United Nations Convention on the Law of the Sea and its triumph last 12 July showed that the country won’t be subdued by China’s strong-arm tactic.

By wining it most of its claims in PCA, it blunted China’s realpolitik approach as it sought a multilateral and legal solution to the territorial dispute in the South China Sea, and asked the international society that it had a stake in the outcome of its case. The Philippines showed to the global society that the appropriate approach for resolving dispute involving overlapping claims to the global commons should be the liberal/legal approach based on multilateralism and international law not on powerpolitik.

“By winning it most of its claims in PCA, it blunted China’s realpolitik approach as it sought a multilateral and legal solution to the territorial dispute in the South China Sea.”

The challenge now for the Philippines is to strengthen its partnerships with law-abiding countries all over the world so that collectively they can prevent China from applying the realpolitik approach in an evolving regional order haunted by history and still susceptible to the use of coercion and force in resolving territorial disputes. 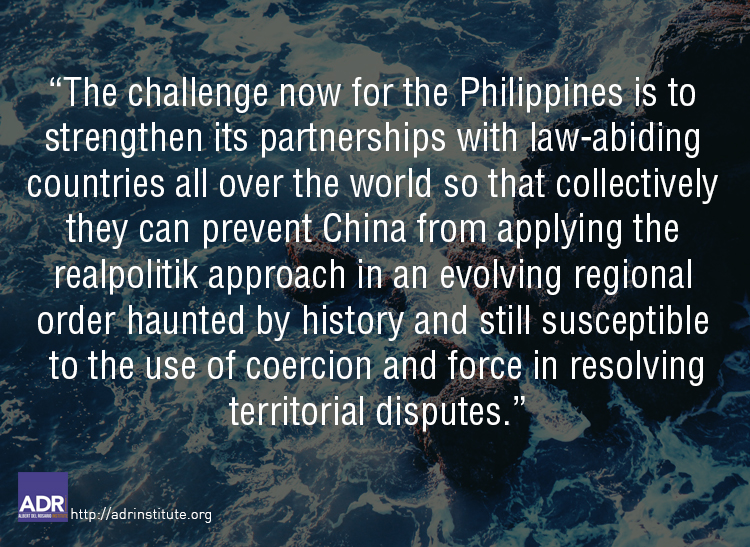 This article was originally posted on philstar.com.