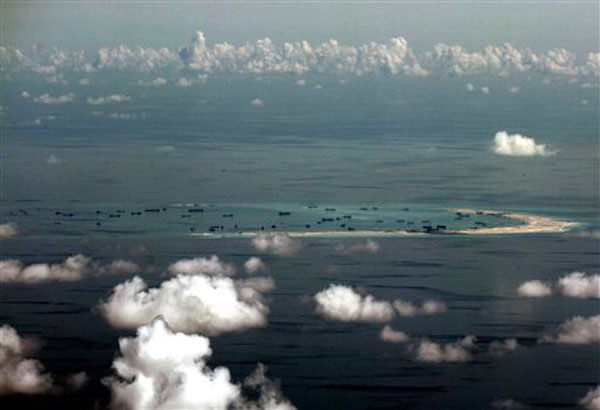 FILE – In this May 11, 2015, file photo, an aerial photo taken through a glass window of a military plane shows China’s alleged on-going reclamation of Mischief Reef in the Spratly Islands in the South China Sea. Ritchie B. Tongo/Pool Photo via AP, File

MANILA, Philippines — Environmental advocates recently called for the declaration of the Spratly Islands as a marine protected area amid the dispute with China.

Ysan Castillo, secretary general of PBEST, described the damage done to the marine ecosystems in the area as “shocking.”

“There must now be a conscious effort to protect remaining coral reefs and preserve marine resources,” Castillo said in a forum at the De La Salle University (DLSU) in Manila last week.

Castillo said that the protection of marine resources in the Spratlys is critical being the spawning area of fish caught in the coastal waters of Luzon, Palawan, Malaysia, the Sulu seas, Brunei, Vietnam and China.

Stratbase ADRi president Dindo Manhit noted that a major fisheries collapse will cause starvation to millions of people in the region.

“A declaration by all concerned countries to preserve marine resources and the banning of destructive fishing in the disputed waters will be a positive move for food security and peace in the region,” Manhit said.

Manhit added that the government must unite every Filipino as a nation to effectively stop the destruction of the country’s marine environment.

The economic damage from China’s activities in the South China Sea is at nearly $6 billion per year from the destruction of an estimated 16,200 hectares of coral reef, according to professor John McManus of the University of Miami.

Supreme Court senior Associate Justice Antonio Carpio earlier said that the Philippines can file another case against China before the Permanent Court of Arbitration for damages in destroying the marine environment in the West Philippine Sea.

“We did not pray for monetary award and none was granted, but we can file because we said China severely damaged the marine environment and the tribunal agreed and even expanded on that,” Carpio said at a symposium at the DLSU last week.

In July, the arbitral tribunal ruled that China’s nine-dash line claim over the South China Sea does not have legal basis and that it has violated its commitment to the United Nations Convention on the Law of the Sea.